The Development of Paper Cups

We often use paper cups in our daily lives, so today we will introduce the development history of paper cups.

The paper cups that first came out were conical and made by hand. They are glued together, which are easier to separate and must be used as soon as possible. Later, folded paper cups appeared, and folds were added to the side wall to increase the strength of the side wall of the paper cup and the durability of the paper cup. But it is more difficult to print patterns on these folded surfaces, and the effect is not very satisfactory.

In 1932, the first wax-coated two-piece paper cup came out. Its smooth surface can be printed with various exquisite patterns to improve the promotional effect. Coating paper cups with wax on the one hand can avoid direct contact between the beverage and the paper, and can protect the adhesiveness of the glue and enhance the durability of the paper cup. On the other hand, the thickness of the side wall is also increased, so that the strength of the paper cup is greatly improved, thereby reducing the amount of paper necessary for manufacturing a stronger paper cup and reducing the production cost. As waxed paper cups become containers for cold beverages, people also hope to use a convenient container to hold hot beverages. However, hot beverages will melt the wax layer on the inner surface of the paper cup and the glue will separate. Therefore, general waxed paper cups are not suitable for holding hot beverages. 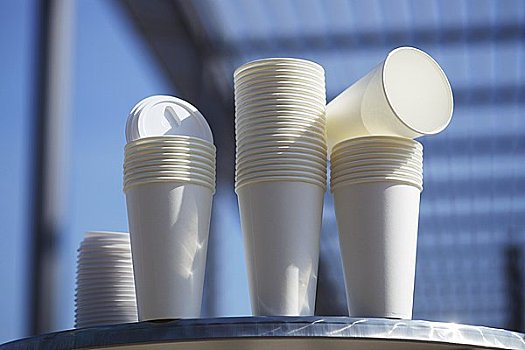 In order to expand the application range of paper cups, double-layer paper cups were introduced to the market in 1940. This paper cup is not only easy to carry, but also can be used to hold hot beverages. Later, the manufacturer applied latex to these cups to cover the cardboard flavor of the paper and to strengthen the leak-proofness of the paper cups. At the same time, the single-layer wax-coated cup that has been coated with latex is widely used in self-service vending machines to hold hot coffee.

With the development of technology, some food companies began to coat polyethylene on cardboard to increase the barrier and sealing properties of paper packaging. Since the melting point of polyethylene is much higher than wax, the new beverage paper cup coated with this material can be ideally used to hold hot beverages, and solve the problem of product quality that is affected by the melting of the coating material. At the same time, the polyethylene paint is smoother than the original wax paint, which improves the appearance of the paper cup. In addition, its processing technology is cheaper and faster than the latex coating method.

So the above is the history of the development of disposable paper cups.